From Down to Earth: Findings by Hiroyuki Murakami of Princeton University suggest that 64% of the cyclone risk in the Arabian Sea was due to climate change. The study further warns that the coastal areas surrounding the Arabian Sea are at specific risk since the geographical location offers cyclones nowhere to go but the land.

Is the Arabian Sea no longer pacific?

Neha Yadav, Down to Earth

The cyclonic activities in the Indian Ocean usually start in spring, months before the monsoon, and end in December.

This year, the extremely severe cyclonic storm ‘Fani’ in the Bay of Bengal was the first of this season and Cyclone ‘Vayu’ marginally skipped the west coast after getting intensified in the Arabian Sea.

The severe cyclone frequency in the north Indian Ocean (i.e., the Bay of Bengal and the Arabian Sea) has registered about a three-fold increase during the past decades. As compared to the previous decades, when about one severe cyclone was expected to form every year during the intense cyclonic period — May, October and November — the number has now gone up to about three per year.

India has a coastline of around 7,516 kilometres (km) of which 5,400 km is alongside the mainland (the rest being part of the Union Territories of Lakshadweep and the Andaman and Nicobar Islands). It is anticipated that around 76 per cent of India’s coastline is susceptible to cyclones and tsunamis.

Although the north Indian Ocean engenders merely about 10 per cent of the world’s total cyclones, their effect is tremendous and devastating. These cyclones affect a relatively small area of the country, but have high mortality and GDP-weighted impacts.

An analysis of the frequencies of the cyclones suggests that during the period 1891-2000, nearly 308 tropical cyclones crossed the east coast, of which 103 were severe in intensity. Of the 48 cyclones that crossed the west coast, 24 were severe.

The Arabian Sea is comparatively less prone to cyclonic storms than the Bay of Bengal. Almost 50 per cent of the storms do not sustain over its waters since the west-central and north Arabian Sea have a colder sea temperature than other adjacent regions. This cold sea surface temperature is not favourable for the development and sustenance of cyclonic storms.

In the usual course, there was an occurrence of one extremely severe cyclone in every four-five years in the Arabian. The cyclone pattern and occurrence has shown a change and the climatological data from the last few years suggest that the Arabian Sea (west coast) also started receiving tropical cyclones of high intensity in a small time interval. For instance, in 15 years (1998 to 2013), five extremely severe cyclones originated in the Sea.

In 2015, within one week, the Arabian Sea experienced two more cyclones, even stronger than Nilofar: Cyclone ‘Chapal’ followed by Cyclone ‘Megh’. Hiroyuki Murakami, an atmospheric scientist at Princeton University in New Jersey, specified that severe storms typically occur during spring. However, the three severe cyclones all hit in October and November. Was climate change changing cyclone behaviour?

The studies associated with temperature suggest that the Indian Ocean is warming, particularly the Arabian Sea, which is doing so at the fastest rate. Previously, tropical cyclones in the Arabian Sea were restricted to Gujarat. In the past decade though, Kerala and Karnataka have also become more vulnerable to  cyclones. A recent example is ‘Ockhi’.

‘Very Severe Cyclonic Storm’ Ockhi was one of the most intense storms, with winds blowing over 115 miles an hour. It left a trail of destruction in Sri Lanka, the Maldives and India (the southernmost districts of Tamil Nadu, Kerala and Lakshadweep) and caused high tides and heavy rainfall in other western coastal states.

The Arabian Sea is quickly responding to climate change signals, heating rapidly and driving more and more cyclones, and excessive rainfall, although, experts still do not understand how much of a performance climate change must work on Ockhi.

Track of cycle Ockhi from genesis to landfall 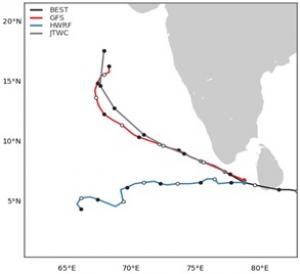 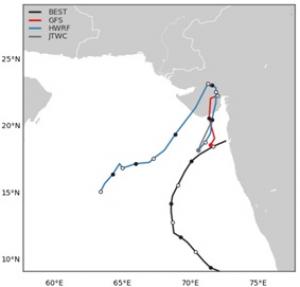 A scientific study conducted by a team at the National Institute of Oceanography, Goa, which was published in the Natural Hazards journal, suggests El Nino Modoki (a climate phenomenon that means ‘pseudo El Nino’) creates conditions which are not conducive for cyclogenesis in the Bay of Bengal.

On the other hand, it offers large convergence over the Arabian Sea, explaining a large number of cyclones in that region. A more familiar phenomenon, El Nino, was found to suppress cyclone formation in the Arabian Sea. The statistical analysis supports the occurrence of the cyclones in the Bay of Bengal and the Arabian Sea in line with the El Nino and El Nino Modoki years.

Among other reasons, one probability is that the rise in Arabian Sea surface temperature makes it warmer than other seas all through this period. Secondly, global warming, which adds to climate variability and weather changes.

Murakami, with his colleagues, used a sophisticated climate model to compare the conditions in 2015 to conditions in 1860, keeping in mind the carbon footprints. The findings suggest that 64 per cent of the cyclone risk in the Arabian Sea was due to climate change.

It further warns that the coastal areas surrounding the Arabian Sea are at specific risk since the geographical location offers cyclones nowhere to go but the land.

In Indian waters, cyclonic storms are associated with heavy rains, thunderstorms, high tides and intense winds that cause shocking destruction in coastal areas. The increase in the frequency of tropical cyclones over the Arabian Sea can result in a massive loss of lives, livelihood and costal ecology.

Neha Yadav is a doctoral candidate at JNU. She writes on public health and environment issues

Why the Indian Ocean is spawning strong and deadly tropical cyclones
Jennifer Fitchett
These high intensity storms have been tied to the very warm sea surface temperatures in the Indian Ocean. Temperatures of 30°C are occurring more often and over longer periods of time. This is a result of gradual warming on a global scale, which has resulted in a net increase in ocean temperatures. High intensity storms have been a frequent feature along the coast of the US throughout recorded history. Their increased frequency in the Indian Ocean should be raising alarm bells because countries like the US are much better equipped to help people prepare ahead of time, and to handle the fallout.

The blame game behind the death toll of cyclone Ockhi
Nidhi Jamwal writes
The India Meteorological Department claims its job was done by forecasting the cyclone, whereas the affected state government believes its rescue and relief actions are “a formidable achievement”. However, the deadly (mis)management of Ockhi raises some important questions, for which clear action-points are needed to avoid a similar situation in the future.

Is climate change making cyclones worse?
Soumya Sarkar, The Hindu
The fury of Cyclone Ockhi is now spent, leaving behind an alarming trail of death by the score and massive destruction in its wake. Hundreds of fishermen are still reported missing at sea. The damage to livelihoods of millions of farmers and fishers in coastal Tamil Nadu and Kerala is yet to be calculated, but will surely run into millions. The first cyclone of the season, which raged in a wide swathe from Kanyakumari to Mumbai, has reignited discussions on how much of the devastation due to a natural calamity is influenced by human-induced climate change. It is widely recognised that global warming is leaving millions of people vulnerable to more frequent natural disasters. Can we then say that Cyclone Ockhi happened due to climate change? The answer is not easy.

Storms in India: The Science of Severity
Manu Moudgil
Around 127 people died and 300 others injured during the severe dust and thunderstorms that shook north India on May 2; wind speeds of 126 kilometres making it the strongest storm in six years. The world may see more such freak storms due to rising temperatures; reducing pollution and protecting forests are perfect preventive measures.