Raghu Karnad writes: The mysterious absence of climate disaster from contemporary arts and fiction is the central issue in Amitav Ghosh’s The Great Derangement, a genuinely important book. The book’s about much else: but stops at every point to ask why our pressing concern, that we are wrecking our climate and habitat, is so ignored.

In a slim volume, the celebrated author asks fundamental questions about the role of literature in confronting the greatest challenge of our times: climate change.

I was sixteen when I read one of the most important novels of the 20th century. It was, as I am sure you’ve guessed, War With the Newts – the story of humanity’s discovery and exploitation of a species of large, intelligent marine newts.

Spoiler: It ends badly. The newts are bred, sold and massed into underwater labour corps – a source of huge new wealth and reclaimed land – until they get political and decide that, actually, they’d rather sink most of the planet’s land-mass into shallow bays and littoral strips, which newts themselves will populate.

Eventually, a parliament of nations is called, to decide on a plan to control the newts, which are simultaneously an economic asset jealously guarded by each country, and an existential threat to human life and the terrestrial world itself. It goes nowhere. The negotiations are interrupted by news that part of Venice has just been sunk. Listeners tune into the newt radio station, which is playing an opera. Then:

“… Hello, hello, we are now switching over to Venetian territory in Italy.”
And then all they could hear was an immense dark swirling as if of rising waters.

For the author of TTWN, writing in the mid-1930s, it was an allegory for the world’s failure to check Fascism. But by linking resource addiction, rising seas, the submersion of Venice, and collective-action snafus at points of planetary crisis, Karel Capek had written a climate-change novel – before anyone knew what climate change was. And his book remains one of very few such novels, despite all that we know, say and fear about climate change today.

This mysterious absence of climate disaster from contemporary arts and fiction is the central issue in Amitav Ghosh’sThe Great Derangement, another book of genuine importance. The book is about much else as well: It tours around the horizon of cultural life in the present era, the early ‘Anthropocene’. But it stops at every point to ask why our pressing concern, that we are wrecking our climate and habitat, is so ignored.

In a book of just over 200 pages, Ghosh examines the habits and handicaps of modern thought and fiction, then breaks fresh historical ground concerning imperialism, capital and energy. He reveals a provocative new lineage for where we are today, torn between carbon-based growth and climate-linked survival, and for our Great Derangement – our inability to look at what we know is coming straight at us.

If you don’t know what that is (if you’ve been living in a cave, but with air-conditioning, since the ’90s) Ghosh lays out the threat in brief. It’s not difficult: The hottest year in recorded history was 2015. But again he finds an original angle, investigating how it will look for Mumbai if overheating oceans produce hurricanes in the Arabian Sea. Short answer, quite like a war with the Newts. 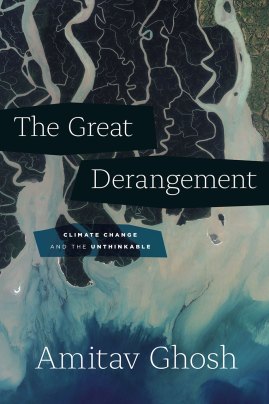 Ghosh looks in on the Vatican, the US military, the Internet, scanning everywhere for the signs of the Great Derangement – and also for signs of hope. Yet he always returns to the problem of fiction, because it’s what he does, and because fiction is esteemed as being both imaginative and important among human pursuits. The Great Derangement puts this vanity to the test. ‘Serious fiction’ has been least willing to deal with humanity’s most serious concern.

The long-run, bourgeois transformation of the Western novel left it fixated on individuals, their intimate surroundings and their interior lives, and at a loss to describe the uncanny and holistic nature of climate events. There are exceptions: Barbara Kingsolver’s Flight Behaviour, Ian McEwan’s Solar, plus a fleet of other novels, all banished to the genre of science fiction.

“Here, then, is the irony of the ‘realist’ novel: the very gestures with which it conjures up reality are actually a concealment of the real.” Climate change may figure in a character’s social milieu, as it does in ours, but climate disaster won’t figure in their world. This is almost a kind of denialism. Not the kind practised by conservative cranks and Big Oil – they at least are active in denying anything’s changing. The literary world is passive: it is in denial about it.

On other matters we are full of rage. Typically, in the fine arts, the less a piece of work communicates, the more likely it is to have a caption that claims it is making a statement. But the spectacle of ready rebellion may actually be a form of collusion, Ghosh says. “Is it possible that the arts and literature of this time will one day be remembered not for their daring, not for their championing of freedom, but rather because of their complicity in the Great Derangement?”

Art in the Anthropocene

Despite these frustrations, Ghosh is always gentle, attempting explanations instead of polemic. The Great Derangementis a book of both passion and finesse. The range of his inquiry is hard to convey – as is the originality of his findings. There are big questions here, such as What is Art for? and Who is History by? and Ghosh leads us up to certain answers. But you choose for yourself how long to dwell on them, whether to rise to their challenge.

At other points, readers may hang back while Ghosh follows a mystical tug from Nature, a slight flirtation with Gaia. Commenting on uncanny synchronicities in our awakening to climate change, he writes, “what it suggests – indeed proves – is that nonhuman forces have the ability to intervene directly in human thought.” The point is not to take this literally. It’s to grasp the error (so well described in War With the Newts) of treating the environment as an inert resource, of denying that purpose or prerogative can exist in any part of nature other than ourselves.

This is a review, so I should disclose that I have met Amitav Ghosh in person, and once was a guest at his home in Goa. About that dinner, what I remember best is his warm, conscious appreciation for the food on the table, for the garden outside where some of it had grown, and for the precious ecological order that gave us our meal. I was moved. It wasn’t how I usually ate, and it felt important.

Our society is full of work that claims to be important. It’s rare that anything is denied that label. You’d need to be wildly trivial before anyone ever asked you, But is that important?

One of the conclusions that The Great Derangement leads you towards, but which you have to explore on your own, is that in a period of crisis not everything is important. Few things probably are. This book is important, in part, because it dares to remind us that importance is not to be ceded too freely. In politics, in media, and certainly in the arts, the word is often used in inverse proportion to how it is deserved.

The ease with which we are outraged or impressed is no measure, either. Our great derangement is precisely that we can barely conceive of what is most urgent. At the biennales on the water’s edge, our rarified and costly creations claim to be carrying important messages. We all lean in close, straining to make them out. But we do not hear the immense dark swirling, as if of rising waters.

RELATED
First read: Amitav Ghosh asks why novelists don’t write about climate change
Scroll.in
Unlikely though it may seem today, the nineteenth century was indeed a time when it was assumed, in both fiction and geology, that Nature was moderate and orderly: this was a distinctive mark of a new and “modern” worldview. Bankim goes out of his way to berate his contemporary, the poet Michael Madhusudan Datta, for his immoderate portrayals of Nature: “Mr Datta…wants repose. The winds rage their loudest when there is no necessity for the lightest puff. Clouds gather and pour down a deluge, when they need do nothing of the kind; and the sea grows terrible in its wrath, when everybody feels inclined to resent its interference.” The victory of gradualist views in science was similarly won by characterising catastrophism as un-modern. In geology, the triumph of gradualist thinking was so complete that Alfred Wegener’s theory of continental drift, which posited upheavals of sudden and unimaginable violence, was for decades discounted and derided.

Could Mumbai Be The Next Fukushima? Amitav Ghosh Thinks It’s Possible
The Huffington Post
“A distance of about 4 kilometres separates south Mumbai’s two sea-facing shorelines. Situated on the east side are the city’s port facilities, the legendary Taj Mahal Hotel, and the plaza of the Gateway of India, which is already increasingly prone to flooding. Beyond lies a much-used fishing port: any vessels that had not been moved to safe locations would be seized by the storm surge and swept towards the Gateway of India and the Taj Hotel. At this point waves would be pouring into south Mumbai from both its sea-facing shorelines; it is not inconceivable that the two fronts of the storm surge would meet and merge. In that case the hills and promontories of south Mumbai would once again become islands, rising out of a wildly agitated expanse of water. Also visible above the waves would be the upper storeys of many of the city’s most important institutions: the Town Hall, Vidhan Sabha, the Chhatrapati Shivaji Railway Terminus, the towering headquarters of the Reserve Bank of India and the skyscraper that houses India’s largest and most important stock exchange.”

K. Ramachandran: Literature in the age of climate change

Amitav Ghosh: Why modern art is unable to deal with the big issues of our times