A temple and a small pond at the origin of Nanduwali

Nanduwali in east Rajasthan started flowing again when the villagers decided to work with nature and not against it. There was a time when they believed that crops grow only with rainfall -lacking knowledge about the underground movement of water and how it can be enhanced. Today, the revived river is a lifeline to them.

Gajanand Sharma is excited about the monsoon this year. He is building an anicut on the small stream that runs through his farm. “After the rain, the land will be filled with water and then I will sow wheat and reap record production in this area,” he prophesises. This forecast doesn’t come from his knowledge of astrology, but that of geology, gained over the years.

Anicut is a cement wall erected perpendicular to the natural flow of a river or a stream. The excess water overflows the walls while the water it can hold, gradually seeps down the earth, raising the groundwater level and replenishing wells. The water also brings fertile silt from upstream, enriching the land beneath it. This monsoon, Sharma’s farm at Ghewar village on the southern edge of Sariska Tiger Sanctuary in Alwar district of Rajasthan will witness this. The anicut will also recharge over a dozen wells downstream; the reason why the neighbouring farm owners too have chipped in with labour and finances. 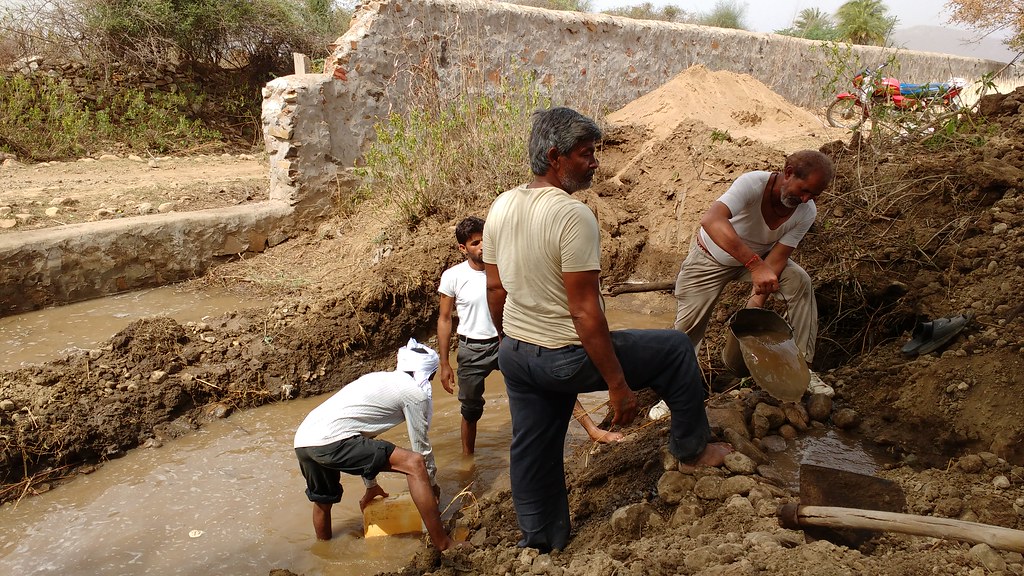 Gajanand Sharma (with bucket) builds an anicut on his farm to humour water.

Besides anicuts, the region has several johads (ponds), medhbandhi (farm bunds) and a rich forest, that turn 20 villages in a radius of 160 square kilometres water surplus. The most evident indicator of the ecological wealth here is Nanduwali, the river which had gone completely dry once, but filled up again after the water table rose and seeped into its channels.

When it was worse

There was a time when these farmers believed that crops grow only with the rainfall on their farms and in wells. They had little knowledge about the underground movement of the water and how that can be enhanced.

“We were heavily dependent on rain and were reaping very little harvest. Only one third of the land could be cropped. Wells would dry up frequently forcing us to migrate to earn a living,” recalls Sharma who spent five years in Delhi doing odd jobs.

The condition of the lower caste families was worse. They either had no land or an infertile patch allotted from the common land belonged to the village. The women would walk 2.5km to Nandoo village, which had more upper caste families, who gave them butter milk in return for managing animal waste. Men would work on others’ farms and get a small share of whatever grew in the good monsoon year. Those with fields and livestock also saw difficult times forcing them to sell their buffaloes because they could not afford to feed them. Huge money had to be spent on the transportation of fodder. Many families replaced the buffaloes with goats.

Today, Ghewar is dotted with pucca houses, good strength of livestock and abundant vegetable farms. A tourist resort has also come up on the outskirts offering rural life experience to the city bred looking for a break from the urban life. Water is available at 40-50 feet despite the monsoon deficit of over 40 per cent last year.

But it’s not just about the water-harvesting structures or the wealth attained that make Ghewar and surrounding villages unique. Had it been so, many regions in Rajasthan have seen a spurt of watershed-management activities and subsequent growth in agriculture. But the real test takes place when these structures break down and the financial support withdrawn. 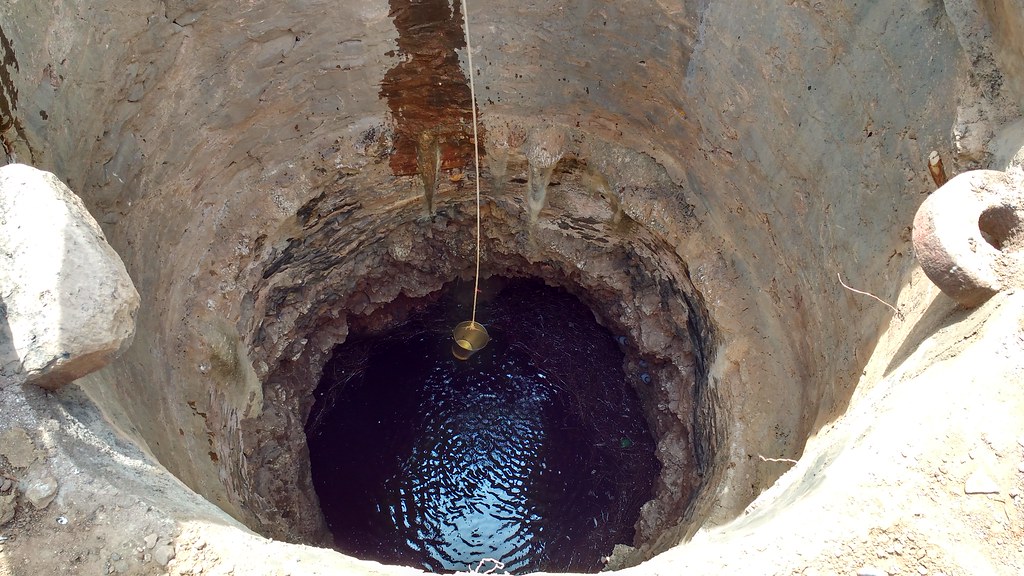 Beginning of a change

Brothers Kunj Bihari and Satish Kumar from Nandoo village wanted to make their region water surplus. But the weak local economy and a divided society were the biggest barriers to their aspiration.

“Despite being a local, it took me one year to gain the confidence of the people. Even though johads are heritage of this region, the loss of traditional wisdom made people doubt if building johads and conserving the forest can assure more water in the wells. The real task was to make all castes sit and work together,” says Kunj Bihari.

Another challenge was to make the villagers self-reliant. Sambhaav Trust, which supported the work initially, was clear that the society has to partly fund the rejuvenation work. The villagers did not have money to contribute, but they chipped in with labour as part of their 25 per cent share.

The good result yielded from the first johad built in Ghewar village helped. “In the first year, the water level of a well near the johad went up by 50 feet. This was real evidence of what we had been trying to explain. Once they started trusting us, all social boundaries were broken because everybody wanted to prosper. They were ready to meet all conditions,” Kunj Bihari says.

The brothers also depended a lot on the knowledge of the elderly, who recalled the systems once prevalent to connect the society with nature. In the past, the full moon and the new moon days were always kept for volunteer work which included strengthening johads or tree plantation. “We revived these traditions along with physical work. After all these years, everybody has realised the connection between social unity, ecology and farm production,” Kunj Bihari says.

New red leaves are sprouting out of Dhaak (Butea monosperma/ flame of the forest) trees but the canopies of Kadam (Neolamarckia cadamba), Dhonk (Anogeissus pendula) and Khejri (Prosopis cineraria) are mature enough to merge and shield us from the harsh summer sun. Peacocks raise a ruckus as we drive towards the Hanuman temple in Jahaj region, north of Nandoo. The unmetalled road, full of rocks and shrubs, give way to moistened earth until it merges with water. This is the point of origin of Nanduwali river, which nourishes the farms and the wells of several villages in the region. Around 20 small streams join the river in its onward journey towards Manglasar dam.

It’s difficult to imagine today that the whole stretch was once dry, but easy to comprehend why it’s flowing again. There was no plan to revive Nanduwali, but nature responded positively to the conservation efforts of the villagers. 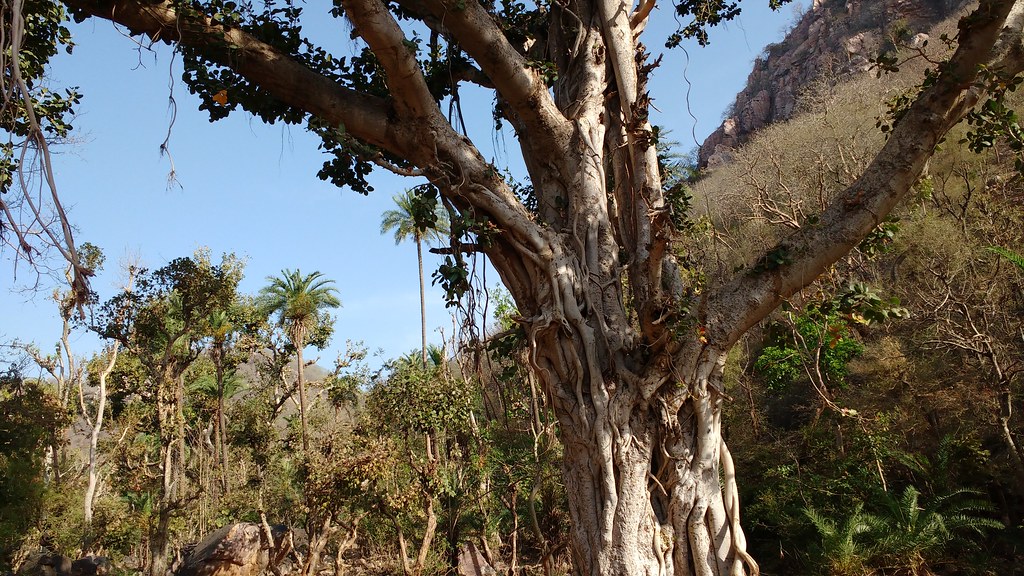 In bygone times, the region used to have forests and grazing areas demarcated for specific purposes. If Dev Bani was a sacred grove never to be damaged, Rakhat Bani, a protected forest area, was to be used only during droughts. Kaankar was a forest area that separated the two villages and Charagah was the area for pasture. Dharadi pratha was another custom in which every caste had a sacred tree species. “Our caste has Khejri as its dharadi. We would pray to it on auspicious occasions, plant and nourish more of it and won’t allow anybody to harm it in front of us,” Kunj Bihari says.

In these villages, all these traditional practices were revived and special forest -protection committees were formed which penalised those who disobeyed the rules. This put a halt on the corrupt forest officials who allowed the villagers to cut trees in exchange for grains and ghee.

Thankfully, nature responded very well to such efforts. Today, there is little revenue land which is not covered by trees. Pipalvani is a stretch with hundreds of young pipal trees protected by the villagers. “More than plantation, it’s the protection from grazing that has helped with the green cover. Once villagers recognised the connection between forest, water and farming, they were willing to work with nature,” Kunj Bihari says.

A credible indicator of this transformation is that while the out migration has stopped, the in migration has started. Many people from villages as far as 50km, are taking fields on lease here. “Now only youth go out for higher education or jobs. It’s different from compulsive migration for survival 20 years back,” Kunj Bihari says.

There are 15 families of Raika community in this area. Raikas are nomadic camel herders  at the bottom of the caste hierarchy living on whatever they get through occasional selling of camels. But they are now settled here and grow vegetables, wheat and mustard on 20 bigha of land which fetch them good money. “The land had no irrigation source earlier, but the construction of a johad nearby raised the water table. Now we have wells which irrigate the crops throughout the year,” says 30-year-old Jai Singh Raika. Buffaloes have replaced the camels and the community has pucca houses now. 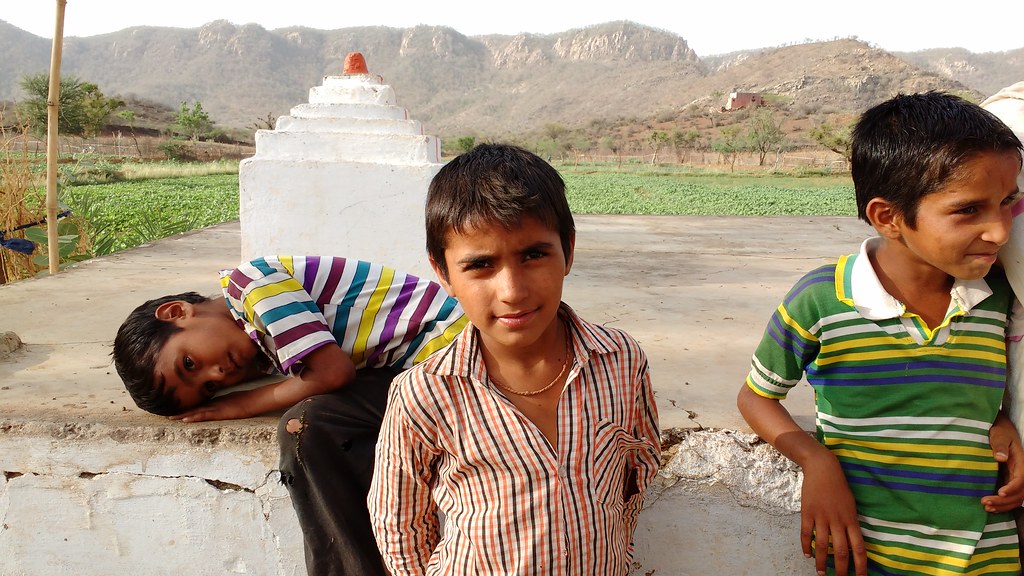 Children of Raika community go to school while their parents tend to vegetable farms (in the background).

Gradually, when water conservation improved the agriculture production, the locals took over the financial responsibility. For the last three years, Sambhaav Trust has not spent money on the anicuts and johads that are being built.

The locals build and maintain these structures and protect forests on their own while Kunj Bihari acts as a technical guide whenever the need arises. “Everybody is an engineer here. They not only know about the surface and the underground trajectory of water, but also the components of structures that can be built,” Kunj Bihari says.

This knowledge has also led to better monitoring of government works as villagers are aware of the discrepancies in accounts and engineering. “Many times, the work done under the rural job scheme is of bad quality. Once we started objecting to that, not much work gets sanctioned for our villages. We are happy with that. At least public money is not being wasted,” says Sharma. 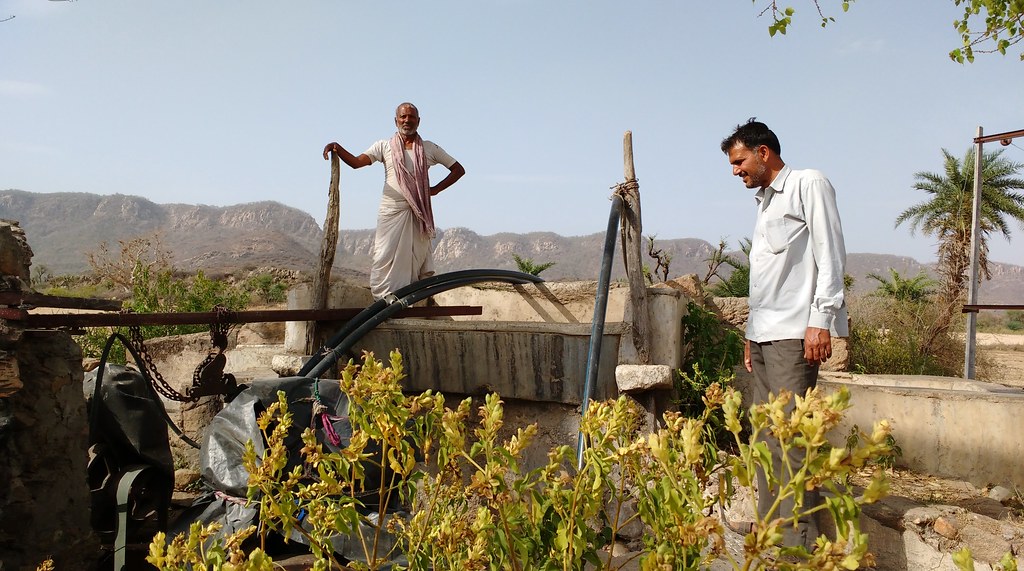 Kunj Bihari (right) with a farmer on his well.

The success story has travelled far and wide. Today, both Satish and Kunj Bihari are guiding the neighbouring regions in similar efforts. Just like Nanduwali nourishes the fields and the lives on its course, the people living on its banks are empowering others with their knowledge.

‘Nature gives us hope’: A tribute to Latha Anantha, river guardian
Sarah Bardeen, International Rivers Network
Dr Latha Anantha, an expert on rivers and one of the first names to crop up in the struggle to protect them, is no more. The founder and moving spirit behind the River Research Centre, Kerala, she was best known for her efforts to save the Chalakudy river.

Paani Foundation is creating a new paradigm for fighting drought
Moin Qazi
The Indian film celebrity Aamir Khan is shepherding a very revolutionary campaign–making Maharashtra drought-free in five years. Khan’s Paani Foundation is galvanising the rural population to go back to fundamental lessons of water management taught by their ancestors. Many Maharashtra villages are seeing water in their parched lands after consecutive dry years.

How a holy hill got its groves back
The Hindu
An afforestation initiative led by naturalists and locals, with support from forest and revenue department officials, has resulted in the Arunachala hill in Tiruvannamalai, Tamil Nadu, shedding its barren, brown visage. Lalitha Sridhar reports on the decade-plus-long turnaround of a damaged fragile, semi-arid ecosystem by successfully harnessing scientific expertise and local knowledge.

How one village’s successful tryst with self-governance inspired others
The Wire
With a predominantly tribal population, Barkheda is a typical central Indian village. A few years ago, the villagers took charge of their natural resources and established a village executive committee. The committee governs all the water bodies of Barkheda, which now has rules on water usage, based on the principles of equity.

Compulsive consumption: The malaise at the core of the climate crisis