Virtually everything in our homes, everything in our stores, got there on a truck. Prior to that, 90 percent of those items were transported on a ship and/or a train. If trucks, trains, and ships stopped running, our global economy and way of life would stop too. Alice Friedemann’s new book examines precisely this prospect. 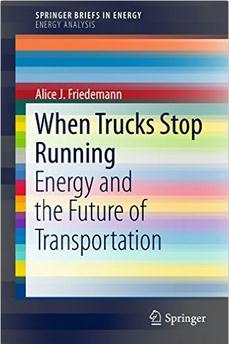 The impact of peak oil on commercial transportation has been of great interest to me after a 22-year career at American President Lines, where I developed computer systems to keep cargo seamlessly moving around the globe and just-in-time between ships, rail, trucks, and customers.

So I was thrilled when Charles Hall invited me to write a book on energy and transportation for his Springer Energy series, a book that has just been published:When Trucks Stop Running: Energy and the Future of Transportation.

Ships, trucks, and trains are the backbone of civilization, hauling the goods that fulfill our every need and desire. Their powerful, highly-efficient diesel combustion engines are exquisitely fine-tuned to burn petroleum-based diesel fuel. These engines and the fuels that fire them have been among the most transformative yet disruptive technologies on the planet. This is a dependency we take for granted.

Since oil reserves are finite, one day supplies will be diminished to where the cost of moving freight and goods with our present oil-fueled fleet will not pencil out. We have an oil glut in 2016 and a corresponding lack of urgency. Yet, inevitably the day will come when oil supplies decline. What will we do? What are our options? That is the sobering reality my book explores.

Consider just how dependent we are on abundant and affordable oil, which fuels commercial transportation: Grocery stores, service stations, hospitals, pharmacies, restaurants, construction sites, manufacturers, and many other businesses receive several deliveries a day. Since they keep very little inventory, most would run out of goods within a week. When trucks stop, over 685,000 tons of garbage piles up every day in the U.S., sewage treatment ends as storage tanks fill up, and in two to four weeks water supplies would be imperiled as purification chemicals were no longer delivered. That is just the tip of the iceberg.

Although ships move roughly 90% of cargo and made globalization possible, it is hard to think of a single thing that isn’t transported on a truck at some point, if only for the last mile. Equally important are other kinds of “trucks” and equipment used in farming, logging, mining, construction, garbage, and countless human endeavors. Certainly it would be better to deliver goods by rail, which are four times more fuel efficient than trucks, or by ship, which can be up to 80 times more efficient than trucks. But there are only 95,000 route miles of railroad track, and 25,000 miles of inland and coastal waterways in the U.S. That’s compared to over 4 million miles of U.S. roads. Just why we are so reliant on trucks and under-utilize more efficient ships and trains is explored in my book.

Renewable electricity – solar and wind — is ramping up, but in our optimism over the renewable revolution, we collectively forget that our trucks, ships, and freight trains don’t run on electricity. Although I’d often thought about Robert Hirsch’s saying that peak oil was best framed as a liquid fuels transportation crisis, I had never fully researched the details of what this meant. After all, vehicles potentially could run on coal-to-liquid fuel, natural gas, biofuels, hydrogen, or be electrified.

So for the past two years I’ve researched the evolution and future of commercial transportation, the technologies and energy resources available now or in the next decade that ships, locomotives, and trucks could run on. The ideal fuel would be a “drop-in” fuel so that we didn’t have to toss out over $1 trillion of vehicles and their engines and $4.6 trillion of transportation infrastructure that comprises 12% of all the wealth in the U.S.

Since fossil fuels are finite, ultimately we will have no choice but to run commercial transportation on renewable energy. The electric grid would have to play a role, so I look at what we would be involved to electrify trucks and locomotives via batteries or overhead wires. This seemingly inevitable future scenario requires understanding the challenges of getting to an electric grid that is 80 to 100% powered by renewables, utility-scale energy storage systems, and understanding how much energy storage is needed to cope with the intermittency and seasonality of wind and solar power.

The co-dependencies of electricity and computers make our transportation system even more fragile and vulnerable to failure. Electricity outages or software/equipment failures prevent ships, rail, and trucks from loading or unloading, since dozens of financial, tariff, manifest, bill of lading, and other documents are required to keep cargo moving.

What I have attempted to do in the book is to investigate every technical and energy option foreseeable for the movement of goods and services. In the process, there is no avoiding an eyes-wide-open look at the challenges. These include renewable liquid fuels, climate change, the financial system, and corrosion.

Politics may be one of the most insurmountable challenges. To understand the evolution of U.S. energy policy and what, if any, plans are being made for the future of transportation, I read the transcripts of hundreds of congressional hearings in the U.S. House and Senate. If the global freight transportation system so central to our era of abundance has any hope of being sustained as oil declines, then political leadership, long term planning, and massive funding are essential. Some may liken this challenge to a technical “moon shot.” Right now, mobilizing for this change looks more like a long shot.

«« Video: Rice Bowl to Ashtray – Documentary on industrialisation and displacement in Chhattisgarh