To the shock of greens everywhere, Indian PM Modi, whose government has absolutely the worst environmental track record in the country’s history, has been declared a UN “Champion of the Earth”. However, coming from Erik Solheim, the UN environment chief facing a string of corruption allegations himself, this ‘honour’ may not be all that surprising.

PM Modi and Cochin airport awarded with UN’s highest honour, the ‘Champions of the Earth’ award
India Today
Prime Minister Narendra Modi, on September 26, 2018, was awarded the UN’s highest environmental honour, ‘Champions of the Earth’ for his leadership of the International Solar Alliance and pledge to eliminate single-use plastic in India by 2022. Cochin International Airport was also honoured with the award in the category of Entrepreneurial Vision, for its leadership in the use of sustainable energy, along with four other environmental change makers. Champions of the Earth, the UN’s highest environmental honour, celebrate outstanding figures from the public and private sectors and from the civil society whose actions have had a transformative positive impact on the environment. (Related: Kerala floods: This village residents say Kochi airport is the source of their misery)

Under-fire UN environment chief forced back to HQ
The Guardian
The UN’s environment chief, under fire over huge travel expenses and rule-breaking, has been forced leave the UN general assembly in New York early and return to his Nairobi headquarters to deal with the growing crisis. The problems for Erik Solheim, Norwegian head of the UN Environment Programme (UNEP), include the Netherlands becoming the latest nation to withhold millions of dollars in funding until the issues are resolved. The Guardian can also reveal that Solheim has now recused himself from professional dealings with his wife and a Norwegian company that employed her shortly after it signed a deal with Unep in April. Pressure is growing on Solheim after he was sharply criticised by a draft internal UN audit over his $488,513 globe-trotting travels that called them “contrary to the ethos of carbon emission reduction”. The audit also said he had “no regard for abiding by the set regulations and rules” and that he claimed unjustified expenses. (Related:  At UNEP Solheim Son Got “Work Experience,” MoBike Pay for Prize Raised to ICP By Whistleblowers)

Chomping of the Earth: Prime Minister Modi Gets Top UN Award!
Ashish Kothari
Just heard that Prime Minister Modi got the United Nation’s top environmental award, Champion of the Earth. This is beyond astounding. A PM whose govt has one of the worst environmental records since India’s independence is rewarded by an obviously blindfolded UN. Ok, so there should be some appreciation of the push for solar and for banning single-use plastic … but these pale into insignificance compared to the enormous environmental harm being done by his govt. It only goes to show how flawed the UN processes are. 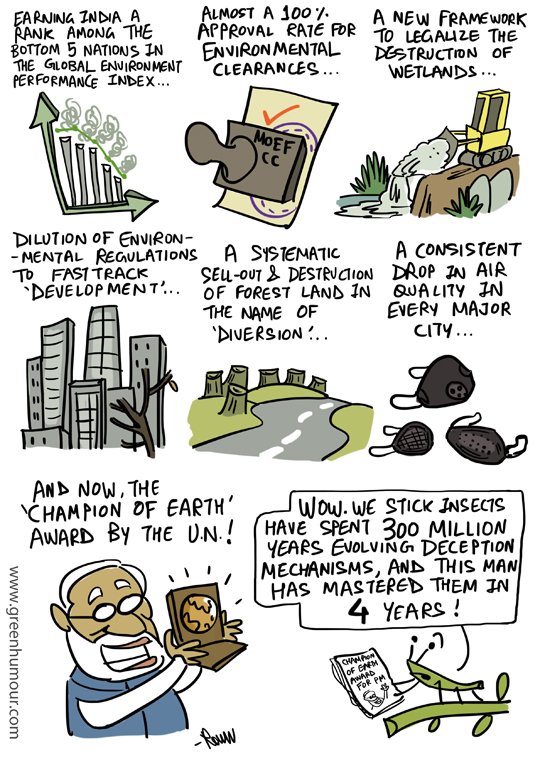 ARTICLE FROM DOWN TO EARTH

Is PM Modi really a ‘Champion of the Earth’?

Even as the United Nations has selected India’s PM for this year’s award to honour his role in protecting the environment, his regime’s environmental track record indicates anything but that

Both have been selected in the “Policy Leadership” category for their pioneering work in championing the International Solar Alliance and promoting new areas of levels of cooperation on environmental action.

However, is the Prime Minister really deserving of such an honour, critics might ask. Throughout his regime of 4 years and 4 months, his ministers have diluted laws without public consultation, undermined institutions and tried everything in their power to make it easier for corporates to exploit natural resources ranging from forests, wildlife, coasts and made the air pollution and waste scenario worse.

In fact, in April-May 2014, at the height of the election campaign, then-candidate Modi had made his views clear about where he intended to take the country were he to become Prime Minister. To quote from a piece written in Down To Earth at the time, “The BJP’s guide for environmental management, interestingly, finds mention under the subject ‘industry’ instead of ‘Flora, Fauna and Environment’. The emphasis on framing of environmental laws in a manner that encourages speedy clearances, removal of red tape and bottlenecks, is a sure indicator of diluted scrutiny of development projects at the time of clearance.”

In its first year of governance between August 2014 and April 2015, the Prime Minister’s Office under Modi considered and implemented “a list of 60 urgent action points submitted by the Confederation of Indian Industry, meant to remove hurdles of environment clearances for industry.”

The Modi government’s “dilution spree” of laws pertaining to India’s forests, coasts, wildlife, air and waste has continued this year. In October 2017, the Centre finalised the third National Wildlife Action Plan (2017-31) of India. However, the state of wildlife protection during the Modi regime has been lacklustre. A recent piece in the data news portal IndiaSpend detailed how the regime has made awarding wildlife clearances easier in its more than 4-year stint and how corporate interests now threaten some of India’s last protected wilderness areas.

Ditto for forests and coasts. In March this year, the Union Ministry of Environment, Forest and Climate Change (MoEF&CC) proposed major changes to the draft National Forest Policy (NFP) 2018. The draft has been criticised for favouring corporate interests in the forestry sector.

In April this year, the MoEF&CC made public the draft CRZ notification 2018. Critics say that the draft will open up India’s coasts to industry and help in aiding the government’s ambitious Sagarmala programme.

Also in April, the government unveiled another troubling scheme, the National Clean Air Programme (NCAP), to tackle toxic levels of air pollution across most major Indian cities, as well as rural areas. Experts say that the proposal is a toothless and directionless plan as it sets no targets for reducing pollution from cities.

Besides diluting laws, the government is also weakening institutions.

For instance, the Union Ministry of Tribal Affairs has pointed out that its authority as the nodal agency for the Forest Rights Act (2006), has been diluted by unilateral policy decisions and enactments proposed by the MoEF&CC without any consultation with it.

Last year, the Modi government had disempowered the National Green Tribunal (NGT). The NGT, which was set up by the Congress-led UPA government in 2010 to adjudicate on environmental litigations, was the third such tribunal in the world after Australia and New Zealand. However, instead of empowering the NGT, the Modi government misused the provision of a “money bill” to make changes to the appointment system of judges to the NGT. However, the Supreme Court subsequently stayed the government’s amendment to NGT appointment rules.

India’s performance in the world vis-a-vis other nations

The government’s policies have taken their toll. For instance, India stands 177 (out of 180 countries) on the Environmental Performance Index, 2018. In 2016, India was ranked 141 on the same index.

India also has the dubious distinction of having the maximum number of environmental conflicts in the world, with the Environmental Justice Atlas (an international database) recording 271 cases in India in 2017.

Should we really be celebrating the Prime Minister’s selection? Food for thought.

Modi govt is building the world’s tallest dam – in earthquake-prone Himalayas!
Himanshu Thakkar
Pancheshwar Dam, kingpin of the river-linking project, will be the Himalayas’ largest reservoir. It’ll be located in one of india’s most seismically active areas, yet the project has been marred by shockingly poor environment appraisal. With little chances of it being economically viable, the project is nothing but a lucrative, contractor-friendly pipedream, writes Himanshu Thakkar.

The Char Dham road project: Narendra Modi’s Himalayan blunder
Ecologise
The 900km, all-weather road enhancing connectivity between four major Hindu pilgrimage sites is PM Modi’s pet project. It will not only displace hundreds of people, but create a massive rush of pilgrims, putting untold pressure on the delicate Himalayan ecology. Experts say it’s also ill-conceived, given its location on the ‘floodway’ of the Ganga basin.

River inter-linking: India’s $168 billion ‘development’ nightmare
Swati Bansal
The project envisages the building of many dams, canals and tunnels, which will lead to a huge social and environmental cost. The proposed Ken-Betwa link alone will destroy over 4,100 hectares of forests. If a single project of interlinking could accrue such an environmental cost, what will be the impact of 30?

Modi and Adani: the old friends laying waste to India’s environment
Climate Home News
Perhaps the most egregious fix, given the prominence of the issue and its consequences for Indians’ health, is the Modi government’s attempts to defer a December 2017 deadline for air pollution standards for thermal power plants. Without these, India’s hopes of reducing deadly air pollution from its electricity sector are nixed.

Why Greenpeace is first on the chopping block
Sajai Jose
As Greenpeace India struggles to stay afloat, the real reason why the government wants to shut down the global environmental NGO hasn’t got much attention: Coal, the single biggest source of primary energy in India, is at the heart of the Narendra Modi government’s ambitious plans to ramp up industrial production in the country. Source: World Resources Institute