Devinder Sharma writes: The development process is so designed that cities have been made drought proof over the years… Life in the mega city does not even provide an inkling of a severe drought prevailing everywhere in the state, where as many as 139 of the 176 taluks have been declared drought hit this year. 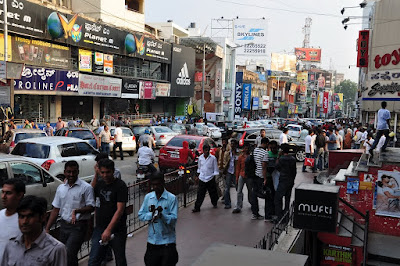 This is Bangalore. Hustling and bustling with life 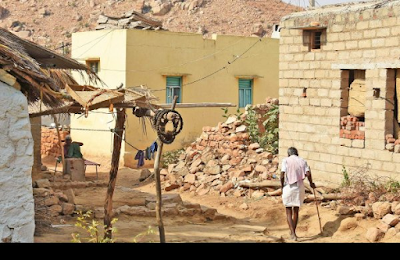 Just two hours away from Bangalore, life in this village is at standstill

I travel to Bangalore very often. At least four times a year, if not more. But every time I go to Bangalore I have never even remotely felt that Karnataka has been reeling under a severe drought. Life in the mega city does not even provide an inkling of a severe drought prevailing just 30 kms away. I am told as many as 139 of the 176 taluks have been declared drought hit this year. Still worse, Karnataka has reeled under drought for 11 years out of the past 16 years.

Just two hours away from Bangalore is the Anantpur district in Andhra Pradesh. A report in New Indian Express (April 28) brought tears in my eyes. “Has my father come back?” asks a 12 year-old Divakar, as he runs into the house straight from the school. “No, he will come back next month and bring you lots of toys from Bangalore,” replies his uncle, Eswarayya. The child is distraught, dumps his school bag, changes his dress and gets on his tricycle to ride along an empty street lined with an endless sequence of locked houses.

Journalist Harish Gilai’s account of how Andhra’s Anantpur district town and villages have become empty is an insight into the tragedy of rural India that no one wants to read. Kutapalle village in Nallamada mandal of Anantpur district in Andhra Pradesh is a ghost town, he writes. Half the houses there were locked. You either find the aged walking about or the kids playing in the street. In another news report, Aditi Mallick and Geetika Mantri, who were part of fact finding mission tells us (TheNewsMinute, May 9) heart-rending stories of how elders in the family have migrated in search of menial jobs leaving behind their children to take care of themselves (to know more, click here: http://www.kisanswaraj.in/wp-content/uploads/Rapid-Assessment-of-Drought-in-Anantapur-and-state-of-citizens-entitlements.pdf)

“Twelve-year-old Bukya Syamulamma, a tribal girlin Kareddipalli village in Anantpur district, lives all alone with her two younger siblings. A petite figure, she lugs 25 kilos of ration to and fro from a PDS shop located in the neighbouring village. Having lost her father to alcoholism last year, Bukya is now responsible for taking care of herself and her brother and a sister.” This seems to be a scene out of a Bollywood blockbuster but let’s not forget this is for real.

“Another 15-year-old in Kareddipalli lives by herself after her parents migrated to Kerala searching for employment. Rama Devi says that she sometimes fears for her safety.” But the bigger question that concerns me is how acute must be the suffering that Rama’s parents must be undergoing that they were forced to leave behind their only girl child in search of a job. Their choice was limited. I am sure no parent would ever think of leaving their children behind. This certainly is not a scene from Hollywood’s popular movie Home Alone. Hundreds of children have been left behind by parents who have migrated in search of whatever little job they can manage.

Anantpur district is reeling under the 6th consecutive year of drought.

In Kerala, no longer God’s own country, families survive on 10-15 buckets of water a week in the Palakkad district. Writing in the Indian Express (May 8), Shaju Philip takes us to Attapaddy, which is faced with the second consecutive year of drought. Kerala is facing its worst drought year in 115 years. All the 14 districts of Kerala were declared drought hit by October, 2016. And yet, if you travel to Thiruvanthapuram or Kochi or Kozhikode or for that matter any of the major cities or towns you don’t get a feeling as if Kerala is reeling under a drought. 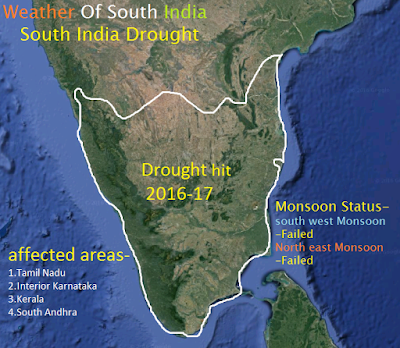 Concluding his five-day yatra through the drought-hit parts of Tamil Nadu, Yogendra Yadav of Swaraj Abhiyan lamented: “The indifference shown by the Union Government has paralysed the State’s machinery and is taking a heavy toll on the farmers in state,” adding: “Cattle deaths are only an indicator of a possible famine in the State.” The recent protest by a handful of Tamil Nadu farmers at Janta Mantar in New Delhi wanting a Rs 40,000-cr loan waiver had attracted a reasonably good media coverage but failed to move the nation.

“It’s an unprecedented situation,” S Panneerselvam, Prof of AgroMetereology at the Tamil Nadu Agriculture University told IndiaSpend. He said the drought had affected 21 of the 32 districts of Tamil Nadu. Incidentally, the State is reeling under the worst drought in 140 years. But again, if you were to travel to Chennai or Coimbatore or for that matter any other town in the State, you don’t get a feel of a severe drought prevailing just a few kms outside the city.

I find it too strange. After all, have you ever pondered why is that while drought hits the region as a whole it is only people living in the villages who bear the brunt? Why is that drought rarely, if at all, strikes the cities and towns? I am sure the God’s were not so unfair so as to ensure that crippling drought strikes only the rural constituencies. I am sure God did not want to punish the people living in the villages for no fault of theirs. So how come the divide that leads to the terrible consequences of drought being inflicted on the rural people has become so targeted?

Latur town in the dry Kuchh region in Gujarat may be an exception but it is very rare that the city of Chennai for instance is faced with severe water crisis requiring water trains to carry water. Not only water shortage, drought normally brings along a whole lot of problems, which are rarely felt in the cities. This must be the outcome of an inequality woven through the process of development.

In my understanding, the development process is so designed that the cities have been made drought proof over the years. The rural-urban divide is so apparent. All efforts have gone to ensure that the urban population does not have to suffer the consequences of a drought. The rivers and canals flowing into the countryside can go dry, but worse-cum-worse the tap water supply in the cities is available for a few hours every evening and morning. Even if water for New Delhi has to be fetched from as far as Renuka dam in Himachal Pradesh or the water supply in Mumbai has to be sucked from the adjoining regions of Western Ghats, life in cities remain oblivious to the terrible cost that is inflicted in the bargain on the rural populace.

This is primarily the reason why people living in the cities are so disconnected from the realities of rural India. They are happy in their own world, and they give a damn to the extent of human suffering just a few miles away in their own backyard. Well, this is where the civilized world has led us to. In a world of selfies, selfishness has reached the limit. #

RELATED
Drought in South India: A Firstpost special series
Firstpost
This is the introductory article in Firstpost’s nine-part series of ground reports on the ongoing water crisis in south India. The series will cover various aspects of the near-calamitous situation in Karnataka, Kerala, Tamil Nadu, Andhra Pradesh and Telangana, with the onset of blistering heat waves that are putting more pressure on existing water resources.

«« Rob Hopkins: Why our imagination needs the dawn chorus

Overdose: The Next Financial Crisis »»

Priya Rajan: A window as wide as the world

We have drought-proofed our cities, and left farms and farmers to die

Growth and garbage: A tour of India’s waste mountain