Eric Holthaus writes: The latest comic from xkcd, the internet’s most famous science-focused webcomic, zips through 22,000 years of Earth’s climate history, juxtaposed with key moments in the history of civilization. Seeing it, you’ll probably come to an inescapable conclusion: Nothing like this has ever happened, and it’s about to get a whole lot worse.

A new webcomic looks at recent climate change through the history of civilization. The result is pretty grim.

On Monday, NASA announced that August 2016 has probably set a new record for the warmest absolute month ever measured, though it’s so close to July 2016 as to be in a statistically indistinguishable tie. That’s saying something, because Earth’s globally averaged temperature normally peaks in July — this year, that didn’t happen. Whichever month is a hair warmer, the conclusion is the same: When it comes to global warming, 2016 is something very special.

The recent records are especially worrying because El Niño, a temporary warming of the tropical Pacific Ocean that tends to boost global temperatures, has already faded. Record global monthly temperatures are more likely during El Niño years, but according to one analysis, El Niño likely contributed only half of the margin by which August’s monthly record was broken. And when you look at the last year in context, it’s clear that 2016 is in a class of its own — a step-change in the planet’s climate. 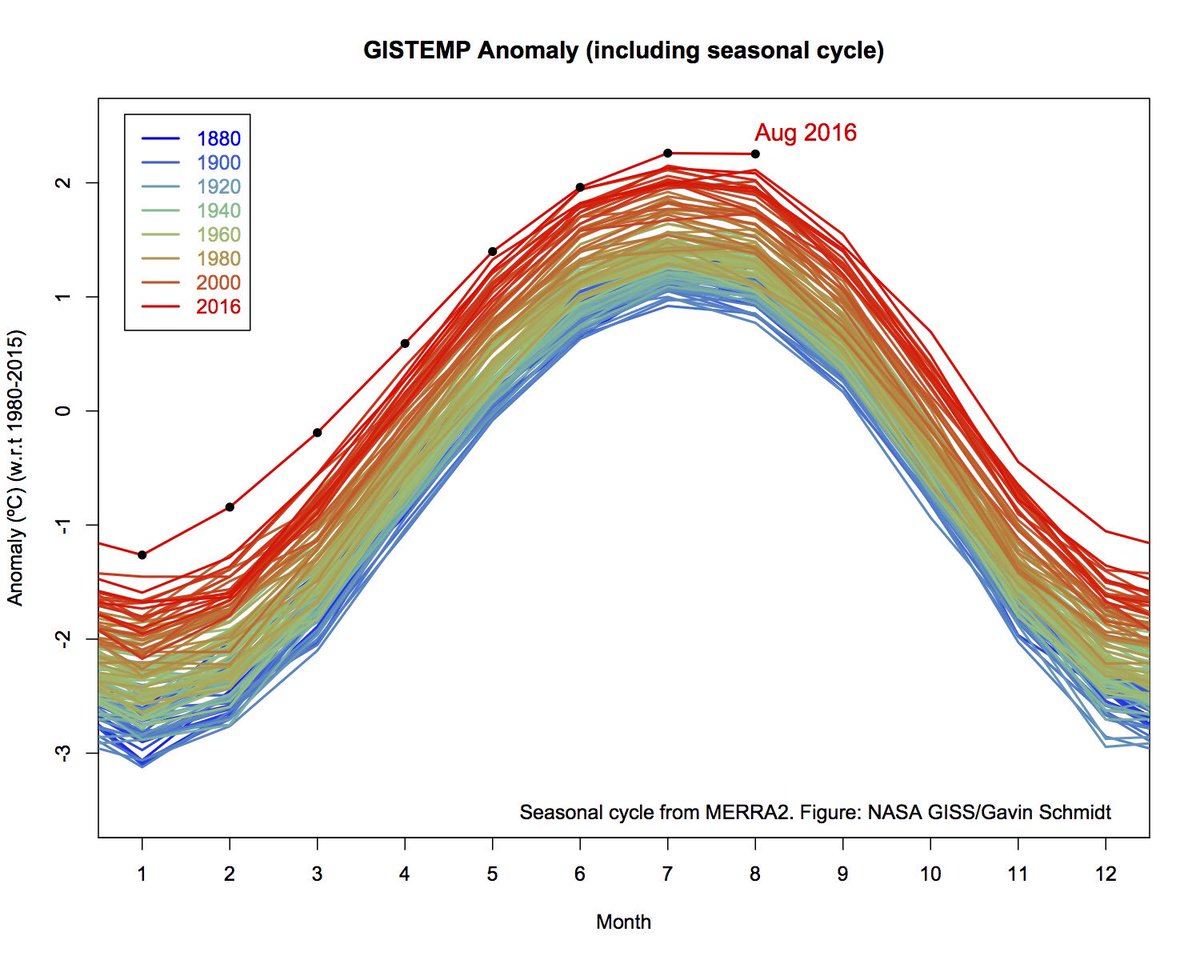 But data is meaningless unless you know what you’re looking at, in context. NASA has done a great job at making their raw data understandable, but moments like this demand special attention. When you take a really long view, the data shows quite simply that we are rapidly leaving the climatic era that gave rise to human civilization.

And there have been tremendous climate-related impacts so far in 2016 alone. Chief among them: an ongoing global-scale coral bleaching event that has affected large swaths of Australia’s Great Barrier Reef — killing approximately 22 percent of it — and prompted a surge of “last-chance” tourism. Turns out, many people want to see one of Earth’s most beautiful places before it changes, possibly forever.

Still, NASA’s Gavin Schmidt cautions that individual monthly records — no matter how impressive — don’t mean much when compared to where the climate is headed. “We stress that the long-term trends are the most important for understanding the ongoing changes that are affecting our planet,” Schmidt said in a statement. Given 2016’s remarkable warm streak — every single month so far this year has been the warmest such month on record — Schmidt said this year is on pace to rank as the warmest ever measured by a wide margin.

Enter xkcd, the internet’s most famous science-focused webcomic. Randall Munroe, who creates xkcd, is a bit of a weather and climate nerd, and has tackled the topic of climate change before. His latest comic, also released Monday, is a trip through the past 22,000 years of Earth’s climate history, juxtaposed with key moments in the history of our civilization. When you scroll all the way through it, you’ll probably come to a single, inescapable conclusion: Nothing like this has ever happened to us before, and it’s about to get a whole lot worse.

The cartoon has sparked a vigorous debate among some climate scientists, butwon praise from Schmidt. In a follow-up email, Schmidt says he consulted with cartoonist Randall Munroe “a little” while Munroe was constructing the comic, mainly on the technique Munroe used to merge the various datasets he used. “I think he did a good job given the constraints of a cartoon,” Schmidt said.

The main objection to the comic, among the scientists I surveyed, is to the way Munroe displays the paleoclimate temperatures — that is, everything in the comic before 1850. Scientists just don’t know the Earth’s exact annual temperatures 20 millennia ago with the same precision they do now, so directly comparing Earth’s current temperature to the relatively distant past as Munroe does is very difficult. But even adjusting for that, Schmidt says the last 30 years as a whole are probably close to exceeding anything our civilization has experienced over any other 30-year period over the past 22,000 years.

And, if we don’t get our act together, we’ll very clearly go far beyond current temperatures over the next several decades: 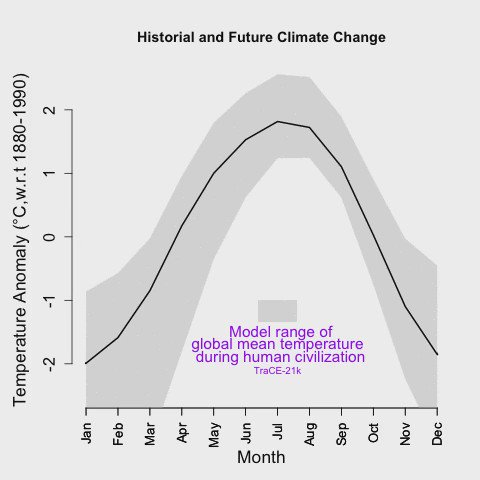 Munroe’s comic has prompted among casual climate observers the same visceral reaction that climate scientists deal with every day: What we’re doing to the planet is very, very risky if you’re concerned about maintaining the stability of our civilization.

In Gadchiroli, the mining of another adivasi god »»