A new book, The Great Invention by Ehsan Masood, unveils the genesis of the Gross Domestic Product and how it shaped the modern economic paradigm. It comes at a time when a growing number of people are questioning this flawed metric. Down to Earth magazine presents exclusive excerpts from the book, followed by a debate.

Excerpt from
The Great Invention
by Ehsan Masood, Pegasus Books

The only hint of caution that morning came, ironically, enough, from Green-span {Alan Greenspan, former chairperson of the US Federal Reserve Boa-rd}. This was still some years before the crash of 2008, and the Federal Reserve Board chairman was at the height of his powers and regarded as the chief architect and steward of America’s seemingly unending run of prosperity. “I cannot say what the size of the economy will be 1 year from today or 100 years from now,” Daley joked {former US commerce secretary}. “But I can say that when we reach the next milestone—$10 trillion —will depend a lot on… Chairman Greenspan.”

Amid the celebrations, however, the Federal Reserve Board chairman had a warning for his audience. In the very mildest of terms, he said that it would be wrong to conflate GDP with quality of life, and he cautioned that an increase in one did not necessarily mean an increase in the other. Just because a country such as the United States has high rates of economic growth, it doesn’t automatically mean it will enjoy a high quality of life, Greenspan said. To illustrate what he meant, Greenspan asked his audience to compare how people in the northern states cooled themselves during the summer months compared with folks in the South. While the northern residents were fortunate to enjoy cool sea breezes, those down south had to turn up the air-conditioning. While both, you could say, enjoyed an equally high quality of life, in GDP terms, the air-conditioning group would come out on top. “The wonderful breezes you get up in the northern Vermont during the summer, which eliminates the requirement for air conditioning, doesn’t show up in the GDP,” Greenspan added.

Greenspan was correct. GDP is neither a measure of welfare nor an indicator of well-being. That is because it is not set up to recognize important aspects of our lives that are not captured by the acts of spending and investing. There is no room in GDP for volunteering or housework, for example; nor does it recognize that there is value in community or in time spent with families. More measurable things such as damage to our environment are also left out, as is job satisfaction. GDP doesn’t even measure the state of jobs.

Greenspan’s was by no means a lone voice cautioning against reading too much into GDP beyond what it says about the state of production, or spending, or incomes. From the earliest days, its inventors, including Simon Kuznets and the British economist John Maynard Keynes, understood that it is not really a measure of prosperity, and Kuznets in particular become skeptical of the way in which his invention was being used as a proxy for this. As far back as 1922, the English banker and statistician Josiah Stamp questioned why national income did not include the value of housework or volunteering and remarked that the trend seemed to be to value those things that are important to rich people.

Today, such voices have been joined by many more, including the leaders of the developed and developing nations. Together with government ministers and civil servants, academics, campaigners, and business folk, they recognize that GDP has strengths but also flaws, and they want change. But they cannot agree on what could or should change, and they are even less certain about how change could happen. 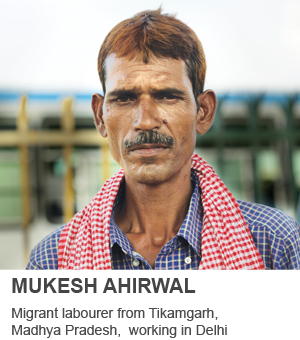 I have never heard about GDP. Our world is confined to our daily income, which is decreasing by the day.

I live under the Sarai Kale Khan Bridge along with my nine-member family, including three children and three women. Earlier, only men from our village worked as migrant labourers to support the family income. Now women are also working. Men are paid Rs 400 per day and women earn Rs 300 at construction sites in Noida. It is our only source of income.

We own about 0.8 hectares of land in our native village. But due to water scarcity and drought, we migrated to Delhi. We are eagerly awaiting the monsoon, so that we can return to our village. 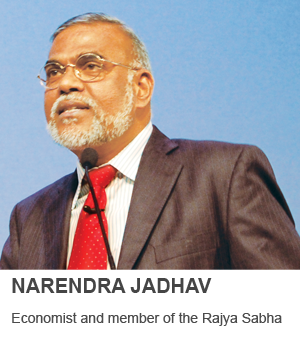 It is the least ªinaccurateº method

When former president A P J Abdul Kalam was in the Central Board of Directors of the Reserve Bank of India, he posed a question to the then governor, Bimal Jalan, during a meeting: “What is this GDP business? Sometimes it goes up and sometimes it goes down?” Jalan responded in a lighter vein:

GDP is not the perfect way to measure growth. But among the alternatives, it is the least “inaccurate” method to compute the growth rate of the country. Goods and services which cannot be valued at market prices are not included. This is the first major lacuna. Take for instance the household services of housewives. They are not paid for the services, but the value of the work they are generating is not accounted.

Let’s take the second lacuna. If the vegetables and fruits a farmer is growing in his/her garden are for domestic consumption, it is not added to the GDP. Does that mean the farmer has not added value? This means all value additions for self consumption, which are not put out in the market, are not accounted in the GDP.

One alternative that has been much discussed is the Gross Domestic Happiness (GDH).

It emerged in Bhutan. However, it is based on an extensive survey and is a subjective indicator. It lacks objectivity. 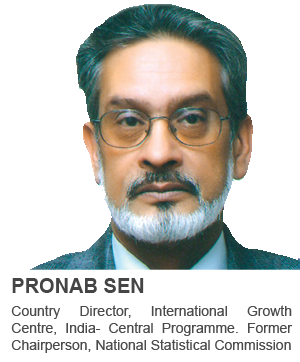 Important to qualify the GDP

There is a close linkage between the growth of output and the growth of income, but it is not exact. There are situations where the two can differ significantly. For instance, think of a situation where the energy efficiency of the production process improves because of technological progress. This means that the same level of output can be produced with less energy being purchased. As a result, the growth rate of output will be zero, but the growth rate of GDP will be positive.

This distinction is important in assessing the appropriateness of GDP as an indicator of growth. Output in itself does not necessarily contribute to human well-being. What does contribute very significantly is the income generated in the process of production. The GDP is, by far, the most comprehensive measure of income that exists today, and is therefore central to any measurement of growth.

Having said this, it should also be acknowledged that the GDP gives no indication of either the distribution or the sustainability of income growth. As a result, a high rate of GDP growth can easily be associated with higher inequality or with serious degradation of natural resources. There are efforts to address these lacunae through concepts such as “inequality-adjusted GDP” and “green GDP”. The important thing to note, however, is that in all these efforts the objective is to qualify the GDP, and not to replace it.

The only genuine alternative to GDP as an indicator of growth is to measure the change in the asset base of the economy. In this approach, assets should be defined not as financial assets, but in the most comprehensive possible way, including physical, natural, human and intellectual assets. The difference between the change in assets and GDP is that the former measures the potential growth of the economy, whereas the latter measures actual income growth. Conceptually, this is a very attractive alternative, but its data needs are formidable and simply not possible at the current state of play. 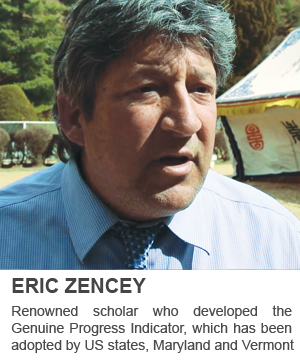 Dragging ourselves towards ecological oblivion

GDP is a deeply flawed measure of economic progress. It has three large problems: It miscounts costs as benefits. Money spent to fix damage, as from strong weather and human accident, adds to its bottom line, though these are costs we seek to avoid, not benefits we want to increase. It ignores many costs, as when it overlooks the healthcare costs and early deaths wrought by air pollution or the decreased productivity, poorer health, lost sleep and lost life pleasure caused by noise pollution. It doesn’t count some economic values at all, such as the benefits we get from volunteer work, do-it-yourself household production and barter.

Simon Kuznets, the economist who led the development of GDP’s precursor statistic, Gross National Product, warned against mistaking it for a measure of general economic wellbeing. It’s an estimate of the nation’s gross monetary transactions, nothing more. As every businessperson knows, an enterprise stands or falls on its net, not its gross. Because climate change and other environmental catastrophes add to GDP when we spend money trying to fix or prevent them, if we blindly take growth in GDP as our goal we can grow ourselves right into ecological oblivion.

In contrast, the Genuine Progress Indicator (GPI) was designed as an estimate of net economic benefit. More than two decades of scholarship, research and development stand behind it. Two US states, Maryland and Vermont, have adopted it as a policy tool and several others actively support its compilation and make varying degrees of use of it.

As you’d expect there’s usually a gap between GDP and GPI. Vermont GPI was about 57 per cent of state GDP in 2011. In Missouri, the GPI was just 27 per cent of GDP in 2014. This means that in 2014, every dollar of GDP growth in Missouri brought only 27 cents worth of actual economic benefit. The rest was cost, mostly environmental cost.

«« A desert storm is engulfing India