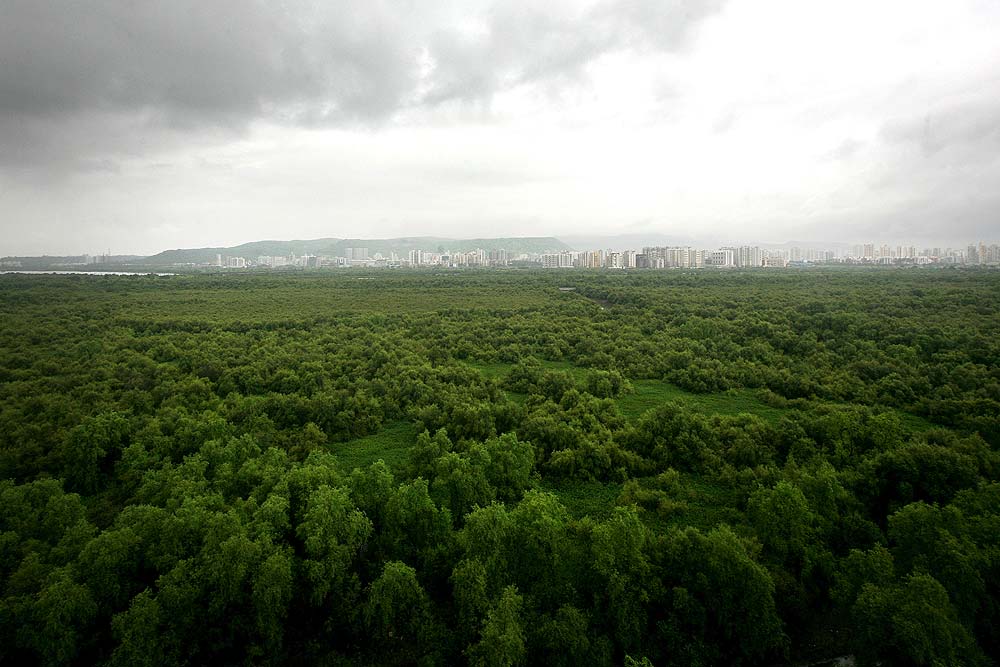 How The NDA Is Whittling Down Green Norms

For years the proposal to develop a second airport for Bombay at Navi Mumbai had been awaiting environmental clearance. The issue had been the rivers and the mangroves near the selected site. With one stroke, all the concerns—including the stipulation to create a mangrove san­ctuary—have been brushed aside by the Narendra Modi government. Late last month, Union minister of environment and forests Prakash Javadekar gave the green signal to the project on the condition that the mangroves should be made unattractive for birds, given their potential threat to flying aircraft.

“In effect it would mean destroying the mangroves to stop birds from nesting there,” says Ulka Mahajan, an environment activist. “The intentions are very clear now; it is all only about corporates. The government is happy to wipe out nature.” The move will also destroy fish breeding in the shallow waters of the mangrove.  “It is ridiculous to say you can plant mangroves,” says Girish Raut, environmentalist and expert on mangroves. “It took hundreds and thousands of years for ecosystems to evolve and it takes one project to wipe it out.”

The Navi Mumbai airport project is just one of the many instances that highlight the BJP government’s cavalier attitude toward environment in its desire to speed up mandatory green clearan­ces for projects. Safe­guards for land, water bodies and environment are being carefully dil­u­ted. The policies of the government are steering us to a situation that poses a clear threat to India’s green spaces.

Closely linked to speedy environment clearances for infrastructure and other projects are forest clearances and the proposed land acquisition bill. While the former is being tweaked unmindful of the damage to green belts, the latter is yet another assault on the rights of farmers and tribals who will have little or no say in whosoever wants to acquire their land for setting up an enterprise or infrastructure project.

It reeks of a clear pattern. In an analysis of one year of Modi sarkar, Centre for Science and Environment (CSE) director general Sunita Narain observed that incremental changes have been made to “ease the process” of project clearances. A major cause of concern, according to the think-tank, is the shift in responsibility of project clearances from the Centre to state agencies minus any capacity building or accountability. The states can now take their own decision on thermal power, irrigation, mining and other projects. Also, like many other development experts, the CSE has questioned the dilution of the public hearing process. Political activist M. Kodanda Ram points to the Polavaram dam project in Andhra Pradesh. Work started under UPA rule, despite violations galore—from not seeking public opinion, improper land acquisition to lack of statutory rehabilitation. In 2011, then environment minister Jairam Ramesh withdrew the environment clearance and stalled the project till the reorganisation of states.

“But now the NDA has given the state government indication of support for the completion of the project, though the clearances are still not available,” says Ram. “In this particular case, the damages to the forest and tribals who are going to be displaced is huge.” Both Orissa and Chhattisgarh have filed cases against the project in the Supreme Court.

A preliminary assessment by US-based Rights and Resources Group on the implementation of the Forest Rights Act has found a decided lack of effort to recognise the rights of forest-dwellers. Despite the law having granted traditional forest-dwellers community forest resource (CFR) rights, the study based on government data points out that so far “the total forest area over which CFR rights have been recognised is less than 5,00,000 hectares or barely 1.2 per cent of the CFR rights potential in the country”. Continue reading

Also from Outlook: Make (Money in India) by Ashish Kothari
Prime Minister Narendra Modi had some time back suggested that one solution to climate change is to switch off street lamps on moonlit nights. Really? Encourage polluting industries and coal-based power plants across India, shove aside forests for expressways, and incentivise rapid growth in motorcars … and then compensate all these carbon emissions by switching off street lamps a few nights a year? Who is Mr Modi trying to fool? Read article

From Catchnews.in: How the govt lets green sinners judge themselves
Corporates and governments pushing for projects with environmental consequences hire experts, who study such impacts. Since field visits by the ministry are rare, clearances are granted based exclusively on data from such experts. Over the years, examples of studies with false information, plagiarism, and deliberate underestimation of impacts have become common. These studies, called environmental impact assessments (EIA) are also often marred by conflicts of interest. Read article

Elections 2019: People’s Manifesto for a Just, Equitable, and Sustainable India

Is there a way out? Announcing the new Radical Ecological Democracy website