Chirag Dhara writes: There is no disputing how urgently India – and the rest of the world – need to clean up its air. Unfortunately, therein lies a cruel twist. A rapid decontaminating of the air of aerosol pollution –assuming it was possible– itself raises the prospect of serious health consequences. The reason: how aerosols interact with climate.

Urban India is only too aware of the catastrophic levels of pollution in most cities. The fact that PM2.5 and PM10 pollution have become standard terminology in the media speaks to the public health crisis we face.

Air pollution has exacerbated chronic respiratory diseases and is decreasing our life span. There is no disputing how urgently India – and the rest of the world – need to clean up. Unfortunately, therein lies a cruel twist. A rapid decontaminating of the air of aerosol pollution – assuming it was possible – itself raises the prospect of serious consequences for health. The reason: how aerosols interact with climate.

The eruption of Mt Pinatubo in the Philippines in 1991 was one of the largest volcanic eruptions of the century. Global temperatures dropped by an average of 0.5 degrees Celcius over the next 2-3 years before returning to normal. In fact, observations show that global temperatures systematically drop after major volcanic eruptions before returning to normal after a few years.

It is also believed that the aftermath of a major nuclear war or an asteroid strikewould see a severe and prolonged global cooling because of the large amounts of dust and ash these explosions would kick up into the atmosphere.

Why do volcanic eruptions have such a pronounced – albeit, temporary – effect on the global temperature?

The Earth’s climate is modulated by several processes: physical ones such as rotation, axial tilt and geography, atmospheric composition such as its greenhouse gas content, and atmospheric and oceanic circulation. For all this complexity, the primary power plant energizing the climate system is solar energy. 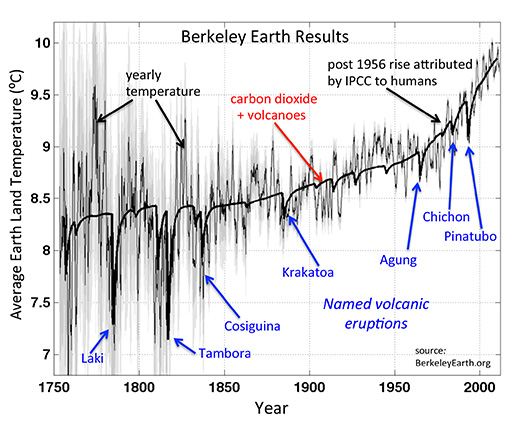 Mt Pinatubo’s eruption injected 20 million tonnes of sulphur dioxide deep into the stratosphere that went on to form a sulphuric acid aerosol haze because of ensuing atmospheric reactions. In a matter of a few weeks, these aerosols encircled the planet.

Aerosols influence climate because they interact directly with solar radiation and modulate how much of it reaches the surface. One category of aerosols are sulphate and nitrate aerosols, which are highly reflective to sunlight. They act as mirrors in the atmosphere reflecting a part of sunlight directly back into space, reducing the amount filtering down to the surface.

Black carbon aerosols (soot) also reduce solar radiation reaching the surface but do so by absorbing a part of it in the atmosphere.

While the mechanisms differ, aerosols, in general, tend to shade the Earth’s surface and cool it.

Aerosols are antipyretics for the planet

The Earth’s average surface temperature has risen by about 1C since pre-industrial times. This temperature rise is the net effect of greenhouse warming and aerosol cooling, major modern sources of both being fossil fuel combustion.

What is well understood is that anthropogenic aerosol pollution has offset some of the warming because of anthropogenic greenhouse pollution. There is, however, substantial uncertainty about the location and magnitude of aerosol cooling although it is believed that the planet’s temperature may have risen by as much as an additional 0.5C in the absence of aerosols.

Aerosols from anthropogenic sources remain suspended in the lower atmosphere unlike those from violent volcanic eruptions that penetrate deep into the higher levels of the atmosphere. These lower atmosphere aerosols are removed from the atmosphere within a few days or weeks because of natural deposition or by being scrubbed out by rain. Thus, their cooling effect would be rapidly extinguished if they were not replenished by continuous emissions by vehicles and power plants.

This makes aerosols the equivalent of antipyretics temporarily reducing the Earth’s temperature until their effect wears out.

Aerosol antipyretic is particularly high over the subcontinent

A particularly dense cloud of aerosols hangs over the South Asian subcontinent called the “atmospheric brown cloud“. As aerosols are bigger and heavier than greenhouse gas molecules and are emitted continuously from fixed sources, they persist at relatively higher concentrations above and around their emission hotspots. For this reason, we would anticipate that aerosol cooling over India may be substantially larger than the global average.

A climate modelling study by R Dileepkumar and coworkers from IITD published in the journal Scientific Reports in 2018 found that the aerosol cooling effect over India in recent decades may be as high as 1 degree Celcius.

This means that India has warmed as much as the global average despite a substantially larger aerosol cooling over the subcontinent.

It is hard to see whether and if India can find the financial resources and the political will to bring in effective and rapid pollution clean-up norms. For the sake of argument, let us imagine it happens.

It is good news for our health that the lower-atmosphere anthropogenic aerosols are rapidly removed from the atmosphere with lower net emission. Unfortunately, this would also rapidly extinguish the high aerosol anti-pyretic effect over India. It is natural to anticipate that this would cause India’s temperature to rapidly spike, one of the biggest problems of which being an even larger spike in the frequency, duration and intensity of heat waves. To reiterate, an increase that would be much more sudden than with a smooth rise in temperature in the absence of air pollution.

Extremes, though rare, pose the gravest risks to our lives as evidenced by the thousands that died during the record 2015 heat waves in India and Pakistan. Heat stress impacts children, the elderly and outdoor labourers the most, threatening organ failures and heat strokes.

Extreme heat can overwhelm the body’s capacity to regulate its internal temperature and cause it to increase uncontrollably. The failure of the body’s heat coping mechanism for prolonged periods compromises the central nervous and circulatory function. Unchecked by emergency procedures, death can follow within hours.

Heat waves also affect health in indirect ways. Prolonged heat waves in 2018 in Europe devastated crops, sending food prices rocketing. The difficulty in affording quality food can impact our nutrition intake and compromise long-term health. What may be “merely” a serious inconvenience for the middle classes can become an existential crisis for the poor.

According to the recent State of Global Air 2019 report, India’s air pollution killed 1.2 million in 2017 alone – about a third of the population of Goa. The necessity of cleaning up India’s air pollution can scarcely be overstated. Yet, a rapid clean-up would cause temperatures to spike extremely fast, resulting in heat waves and destabilization of local climate, that would, in turn, pose a grave threat to life and health.

It would serve us well to recognize that we would not be quite so trapped between a rock and a hard place if we had historically paid greater attention to moderating air pollution. Grave as our situation is, it will only get worse if we continue doing business as usual. Polluting and then (maybe) cleaning up is far different from not polluting in the first place.

The author is a climate physicist.

The hidden connection between air pollution and heat spikes: India’s lethal double bind
The Conversation
India has an extreme air pollution problem, which kills up to 400,000 people every year. This pollution, made up of fine particles called aerosols, also has the effect of cooling the local climate by reflecting or absorbing sunlight before it reaches the ground. It is feasible that India’s pollution problem has been “hiding” extreme heat spikes.

Fifteen of the 20 most polluted cities in the world are in India: New report
Tish Sanghera, IndiaSpend
From IndiaSpend.com: Fifteen of the top 20 most polluted cities in the world are located in India, according to an analysis of air quality in several cities around the world by IQAir Group. Gurugram, in Haryana, topped the list with an average annual particulate matter (PM 2.5) quality of 135 g/m3 (micrograms/cubic metre), in 2018.

Darryl D’Monte: Does India’s refusal to tackle air pollution amount to genocide?
Darryl D’Monte, The Indian Express
There were 1.1 million premature deaths in India due to long-term exposure to pollutants. While China registered slightly higher figures, it has now acted against this hazard—the situation in India, in contrast, is getting worse. The highest number of premature deaths globally due to ozone is also in India. Might all this qualify as genocide?

Spotlight: Is ‘petcoke’ the hidden villain in Delhi’s pollution crisis?
Aditi Roy Ghatak and Karl Mathiesen, Climate Change News
Delhi’s killer smog has been blamed on many things, but rarely on highly polluting industrial fuels like petcoke. India is the world’s biggest importer of this dirtiest of fuels, banned in most countries. Last month, the Supreme Court banned it in the NCR; but given the big players involved, who will ensure the ban’s implemented?