Gladson Dungdung writes: With the CAMPA bill being passed, the forest department has regained its lost hegemonic power over Adivasis. Many past and present instances suggest that the CAMPA amounts to the return of a British Raj-like regime to the forest, aggravating resource based conflict and the enmity between the State and forest dwelling communities. 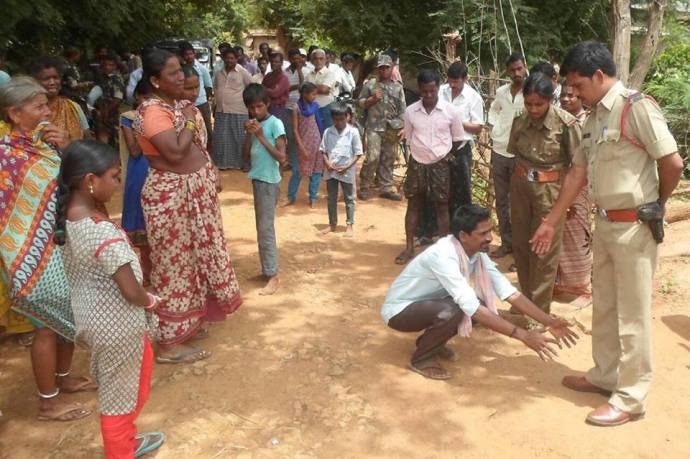 Harassment of Adivasi families in Yellandu division of Khammam district in the state of Telangana, alleging the Adivasis as encroachers of the forest lands.

It was first time in the Indian history, when the Indian State had officially accepted the historical injustice committed to the Adivasis and other forest dweller communities, and promised to right the historic wrongs by recognizing their traditional rights over the forest and forest land under the Scheduled Tribe and Other Traditional Forest Dwellers (Recognition of Forest Rights) Act 2006, popularly known as the Forest Rights Act. However, before the Act would be translated into reality, the BJP led NDA Government put the speed breaker on it by enforcing the CAMPA, which is a great setback to the forest rights of the Adivasis and other forest dweller communities. There is huge fund Rs. 42,000 crore remained unspent under CAMPA fund and there would be availability of additional Rs. 600 crore every year under the CAMPA fund. Hence, the Indian Bureaucracy is overwhelmed to enforce the CAMPA, which will provide them a great opportunity for harvesting.

As far as the forest governance is concerned, the forest department has regained the lost hegemonic power through CAMPA, which will further complicate the problems and, of course, the department will unleashed the violence, atrocities and suppression against the Adivasis and other forest dweller communities while enforcing it. The question is whether it is merely an apprehension? There are numbers of past and present circumstances, which suggest that the CAMPA is a return of the British regime to the forest, which will further enhance the resource based conflict and also, regenerate the enmity between the State and the communities.

The state of Jharkhand is one of the crucial examples, which has a long history of resources based conflict between the State and the Adivasi communities, that had begun during the British regime in 1779, when the revenue was imposed on land and forest produces, and the Adivasis’ habitations were also declared as eminent domain and property of the State by enforcement of the draconian laws – the Permanent Settlement Act 1793, Land Acquisition Act 1894, Indian Forest Act 1865 and so on, which facilitated the grabbing of the Adivasis’ lands, territory and resources. After India’s independence, the Laws, policies and programmes remain the same. Instead of white, the black rulers continue the same pace of violence, atrocities and suppression against the Adivasis with a clear intention to grab their remaining natural resources.

The CAMPA has enhanced the State’s power to grab the community forest resources, which is the only source for the survival of the 60 percent Adivasis. Needless to say that the Adivasis economy is completely based on agro-forest and 91.1 percent Adivasis still live in the rural areas and merely 8.9 percent of them have shifted to the cities. This clearly means the community will not survive without the forest, which is not merely the livelihood resources for them but their identity, culture, tradition, ethos and existence rely on it. Unfortunately, once again, they would be pushed out of the forests in the name of regeneration, protection and development of the forest.

Much before the CAMPA was passed by the Indian Parliament, the Jharkhand government had already started the processes for enforcement of the CAMPA. The Chief Secretary, Rajbala Verma, confirms in a meeting of the Forest officials, held in Ranchi on 25 July 2016 that the Jharkhand Government had already sent a CAMPA plan to the Centre Government. In the financial year 2016-17, the Jharkhand government had proposed to build 36,400 forest fencing pillars, with the investment of Rs. 144 crore, which the Centre has already sanctioned. In the CAMPA fund, Jharkhand will have a share of Rs. 399 crore. Consequently, under the guise of regeneration of the forest, the Forest Department has already begun to build the forest boundaries in Simdega, West Singhbhum and other districts of Jharkhand leading to a huge conflict between the Forest Department and the Adivasis. The Adivasis are protesting and destroying the forest boundaries, and in response, the Forest Department has filed cases against them, unleashed violence and suppressed them.

The CAMPA has pushed back the agenda of Forest Rights as the Government is more interested in enforcing the CAPMA instead of Forest Rights Act.  Johnson Topno, the State Manager of PACS, the organization jointly enforcing the forest rights with the Tribal Welfare Department of Jharkhand Government, reveals that there are 14,000 villages in the forest region in Jharkhand alone, where there is possibilities of one million individuals and 12 thousand community claims, which will take another five in converting to entitlements. By the end of April 2016, the Jharkhand government had distributed merely 46,149 entitlements under the Forest Rights Act 2006 including 44,702 individual and 1447 community entitlements.

The CAMPA disregards the Forest Rights Act and PESA Act 1996. Both the Acts empower the Gram Sabha (village council) for management, development and regeneration of the village’s natural resources.  Therefore, there was a demand that the CAMPA fund to be given to the Gram Sabhas for the protection, regeneration and management of forest and forest biodiversity, which was disregarded due to corporate, environmentalist and so-called conservationists’ lobby. The most important question is whether is CAMPA has really intention to protect the forest? In the last two year of NDA regime, 34,620 hectare forest land is already diverted for so-called development projects and 40,478 is in the pipeline. The Indian government acknowledged in Forest Survey 2011 that the forests are remaining only in those regions where Adivasis are residing. What does it mean?

Let’s not forget that the Jharkhand is one of the crucial states, where 22 out of 24 districts are under the control of the left wing extremists and the centre is spending huge amount of money under IAP in the name of containing the Naxalism. Most importantly, when the state was curved out from Bihar in November 2000, there were only eight Naxal infested districts. One of the most important reasons for the shifting of the Naxal Movement from the Dalit hamlets to the Adivasis’ natural resource hub is the violence, atrocities and torture unleashed against the Adivasis by the Forest Department, which clearly means the CAMPA will further provide fertile soil for the growth of Naxalism in the forest regions.

Interestingly, a notional value of India’s forest is Rs.115 trillion but the money collected from diverting parts of this land for industries won’t go to the communities as per the recommendation of the Expert Committee, but they are blamed for deforestation instead. The fact is that the Adivasis are not only consumers of the forests but protectors and conserves too. In fact, the idea of co-existence, which exists in Adivasi philosophy, is the only way for regeneration, protection and development of the forest. The Adivasis have their century old comprehensive methods, rules and policies for preservation, protection and conservation of the forests, which needs to be promoted and encouraged, and incorporated in the CAMPA. Without respecting of rights and entitlement of the Adivasis over the forest and forest land will always generate more and more conflict and complicate the problem instead of resolving it. 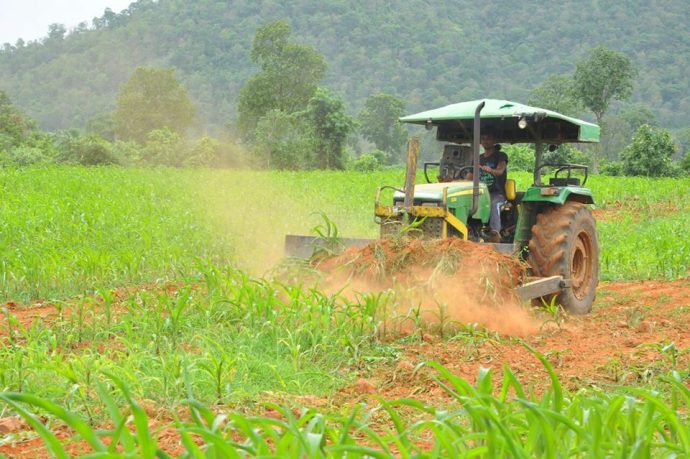 The Forest and Police departments together destroyed the crops of Adivasi families in Yellandu division of Khammam district in the state of Telangana, alleging the Adivasis as encroachers of the forest lands.

Gladson Dungdung is a Human Rights Activist, Researcher and Author of several books including Mission Saranda : A War for Natural Resources in India, Whose Country is it anyway?, Crossfire and Adivasi aur Vanadhikar (Adivasis and Forest Rights).

«« How modern schooling is aiding the destruction of the biosphere

Forest rights: The arrogance of the ignorant

Dhruv Rathee: Environment is the Modi government’s most under-reported disaster

India is not ‘self-destructing’ – it’s being destroyed systematically